Experiences of Javelin Carnival in June 2019.

First day in javelin carnival start on sunny day. In the morning I was with international group, when they had a throw exercise. The British team is in the javelin carnival every year and that is the group which I worked with all the carnival. Their athletes are 15- 22 years old. In the first training session took them some warm-up like functional stretching, balance and coordination exercises before throwing. I was very surprised, that their shoulder stabilization, abdominal, core and posture were isn`t so good that javelin throwers should be. At the same exercise I got familiar with the British main coaches, Bronwin Carter and Mark Bradford and we talked about their training.

Because I saw the British problems, I planned the afternoon session functional movements which do good balance and posture on their body. They had many differences of sides. The head coaches took pictures and videos for home training when I learned the British throwers. After training session we had very good discussion with parents why it is important to do functional movement and core training and how often. I thought that posture and core is the basic thing when we talked about one person`s daily health promotion regardless of he/ she is javelin thrower or isn`t. The first day showed me that the carnival was were right place to do health promotion both at the young athletes that at the coaches who need more information how we supported the young athletes. The coaches was very pleased that I was here helping them. And to me it was very interesting day because when I kept them functional movement lesson there isn’t any Finnish people in the same area who I could ask English words. But survived it!!

Second day was also very interesting day. I was doing like practice work. I gave five British athletes some advice what they have to do that their pain isn`t so big. They have same kind of problems. Those who have problems in their upper body, every athletes had the shoulder of throw arm turns forward. The pain was little bit different but when I checked out their bodies, the lack of shoulder stabilization is the main reason every thrower. We discuss that they understand why they have problems and what they have to do that they can throw without pain and do long career. Two athletes I made some massage and treatment because they got little bit hurt when I they threw in competition.

I discussed with Bronwin why their posture isn`t so good and they have pain. Bronwin said that track and field is much smaller event than for example football. It` s interesting that track and field starts in England much later than for example gymnastics and swimming. You can start it about nine year old. On my mind it`s too late. When they start, they have so much zest only to throw, not to do upkeeping exercises. In Finland children can start athletics very tiny and it`s possible that that’s why their core, balance and posture it`s better than British javelin throwers. My man and my son were at the same time walking carnival in Jämsä when I was in Pihtipudas. There were Norwegians walkers and they told that they are much to learn Finnish walkers how they do upkeeping exercises. Bronwin said me the same thing. She also told that in athletics are too little coaches who know how to arrange young athlete`s daily living, their exercises, their eating, their sleeping and other stuffs which promote young athlete`s health and long-lasting career. That’s why they come every year in javelin carnival to take advice how to promote young athletes health. And like in Finland the digital solutions are very famous in England when we discuss with parents of British throwers! That’s one reason lack of posture.

In javelin carnival there were also quite much Chinese throwers. They only speak as a result of interpreter. On Friday we have lecture where Chinese throwers told us how they practice. On the lecture there were three language, Chinese, English and Finnish. Big difference compared with England and Finland is money. The China is a rich country and good javelin throwers get salary from state when they practice and throw and they don’t have to pay anything. Young throwers can also live and practice in javelin school which they have to pay only 6, 5 euros per month. That’s why they have so much better conditions to become better throwers and their level has risen much. For example in last worldwide competition one Chinese woman thrower got silver medal. They also said that they are strong because they do every exercise, like also upkeeping exercises, on good attitude. That is issue which I discussed very much with Mark. British do throw exercise very good attitude but they have to better their attitude toward upkeeping exercises.

On Friday I was with different kinds of exercises. There were for example weight lifting clinic and I analyzed with Bronwin British throwers technic. Bronwin said that many of their boys don’t ever before do weightlifting. Weightlifting needs to good core and posture. Like the picture shows core isn’t enough tough to keep their back on straight and they were problems to go deep squat because of lack of hip mobility.

On Friday I also followed 17 to 19 year old boy´s video analysis from their competition throws. It was quite interesting to try to understand biomechanics of javelin throwers. I understood that if they isn’t good core, their posture is too backward and back is too much on the arc and that´s one reason to back problems on later years. After video session it was technic exercises. There were running with rubber band like they run with javelin. I noticed the same problem than on videos. Core isn’t enough tight to keep back on straight and under control.

It is traditional thing that every year all javelin schoolers, coaches and parents march to Pihtipudas marketplace. In marketplace javelin schoolers introduce themselves and there are some playful competition. This year there were three teams, Finnish, British and Chinese. There were three different competition and Finnish team got the win. The British were on the second place and Chinese on the third place.

Second competition was taking cone from the ground to toes and throwing cone to bowl. Picture: Anne Kivivuori

Third competition was to do at first paper flight and then throw it as long as you can. Picture: Anne Kivivuori

On Saturday we also chat with Bronwin and Mark how they on coaches can get right support to their throwers. I showed them good shoulder stabilization exercises. And I also got them good exercises to my own teacher`s work!

The javelin carnival starts on nice summer weather, but between the start and the end it was colder and quite windy. The last day was again very lovely summer weather. The last day always consists of the main competitions. There were plenty of audience because all the best Finnish throwers were on the line. In this year there were also very good international throwers with in competitions. In podium we saw international color. Women`s win went to China and Chinese man thrower was in the second place. 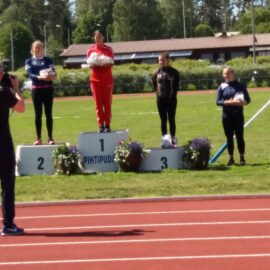 Javelin Carnival was very international happening this year. There were people from England, Scotland, Italy, China, USA, Trinidad & Tobago, Korea and Latvia. I had to use English a lot in this javelin carnival. I speak it and hear it almost all the time. It`s challenging that different people speak English different way so I had to keep focus on hearing all the time so I understood what they are saying. All the lecture and announcements also are spoken in English and the internationalism showed very much in javelin carnival. For example for Chinese people had to make their kind of food. I also chat with British young thrower`s parents and they for example asked me help to their own pains.

I chat quite much with Latvian thrower Lina Muze along carnival different things like her rehabilitation to back on top of the world after very bad knee injury. Lina is a wonderful person and treats other people well although she is a superstar!

Lina Muze and Anne after the competition. Picture: Anne Kivivuori

It was very educational experience to me. I don`t use my normal life English at all. I have been in javelin carnival many, many times, but I haven`t speak English then. It is very nice to speak. It was plenty of situations which I wasn’t remember all the right words but it was also funny that counter side understood when showed something on my body language and then the chat goes on. Besides of using English I got plenty of good exercises which I can use my own teacher`s work to help people to promote their health. It was also nice that I got the trust from javelin carnival coach team that I was as a coach and expert on this carnival. Next year I will go again in javelin carnival and then I will speak lots of English also!! Instructor Anne Kivivuori says thanks and bows deep. Javelin carnival, we see on next summer, also on signs of international.

This blogipost is part of the welfare coordinator students (Master Degree Studies) study module Working and Stydying in International Environment. The focus of this stydy module is that the students can strengthen their communicative skills and professional experience in an international learning environment and learn effectively as a team member in another cultural environment. You can read more www.savonia.fi.